What is it about bunnies? They’re so cute, so lovable, and somehow they always manage to make for a great children’s book. Here are some favorites (old and new) that your child will love, too! My Giant Bunny
by Russell Ginns and Jonathan Maier

A favorite from our own Second Grade edition of Hooked on Phonics Learn to Read is My Giant Bunny, written by Russell Ginns and Jonathan Maier and illustrated by Guy Francis. It’s a story about a boy and his best friend, who happens to be a giant bunny. Size has advantages and disadvantages throughout this sweet read, but at its heart, this is a book about friendship. The Runaway Bunny is a classic tale written by Margaret Wise Brown and illustrated by Clement Hurd. In this story by the author of Goodnight Moon, a little bunny threatens to run away, but soon realizes that he can never run to a place that’s outside the realm of his mother bunny’s love. Get cozy with your own little one for a timeless story of family and love. In author Mo Willems’s Caldecott Honor Book, Trixie and her daddy visit the Laundromat. Trixie can’t talk yet, which becomes a major problem when she realizes her stuffed bunny is gone. Good thing her daddy (with a little help from her mommy, too) is determined to make it all right again. Rosemary Wells’s lovable bunny characters are featured in countless tales. In this story, the sibling bunnies are making cakes for Grandma’s birthday, but Max keeps spilling Ruby’s ingredients. Ruby sends Max to the grocery store again and again, and each time Max tries to add the secret ingredient he needs for his earthworm birthday cake: Red-Hot Marshmallow Squirters. The grocer can’t read Max’s scribbles until Max finally finds a creative way to make himself understood. Henry and the Buccaneer Bunnies
by Carolyn Crimi

In this high seas adventure written by Carolyn Cimi and illustrated by John Manders, none of the buccaneer bunnies aboard the Salty Carrot can understand why Henry, son of the captain Barnacle Black Ear, spends all his time reading instead of doing normal pirate things. Soon, though, the crew comes to realize that reading can really come in handy!

Duck! Rabbit! by Amy Krouse Rosenthal and Tom Lichtenheld is a great read, and a real conversation-starter. Some of you may argue that this is really a book about a duck, but that’s the fun of this new book of optical illusions. Is it a duck or a rabbit? There are convincing arguments for both, so it’s up to you and your child to decide. 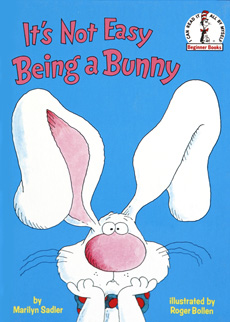 It’s Not Easy Being a Bunny
by Marilyn Sadler

One of Dr. Seuss’s Beginner Books, It’s Not Easy Being a Bunny by Marilyn Sadler and illustrated by Roger Bollen tells the tale of P.J. Funnybunny, who runs away from home because he doesn’t want to be a bunny anymore. When P.J. finds it hard to fit in with the bears, pigs, and the other creatures he meets, however, he realizes how much his family means to him after all.