Warning: call_user_func_array() expects parameter 1 to be a valid callback, class 'collapsArch' does not have a method 'enqueue_scripts' in /home/customer/www/blog.earlymoments.com/public_html/wp-includes/class-wp-hook.php on line 307
 Stuck for a Good Story?

We’re very excited to welcome children’s author Dan Elish to the Hooked on Phonics blog. In addition to writing the Broadway show 13, Dan has written for children’s television and is the author of several young adult novels, including The Attack of the Frozen Woodchucks and Confessions of an 8th Grade Basket Case.

Like most kids, my children like being read to before bed. But that never seems to be enough. After the book is finished and teeth are brushed comes the inevitable demand for a genuine, out-of-my-head, made-up story. What choice does a parent have but to agree?

As a writer, I admit to a certain pride in some of the tales I’ve come up with over the years. Most involve a rotating cast of characters. There’s Hoo-Ha Fiddly Dee (a two-headed, eight-armed dentist from Neptune) and Woo-Woo Wanda McGee (who rides a giant pink-and-purple tractor). The list goes on. And for a time, I was on a roll, whipping off nightly tales of adventure and suspense that spanned the universe. 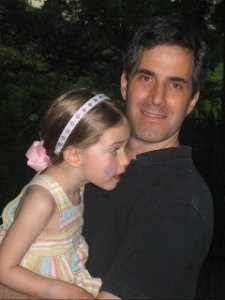 But one night, my well runneth dry. No new planets to conquer. No new weirdly named characters. One of the joys of parenthood suddenly became a chore. To my chagrin, I found myself begging off at story time: “Not tonight. Daddy has a headache.”

It turned out there was someone who could help in my very own apartment. I said the following morning, my voice quavering with excitement. “We can tell a story together!”

The next night, we put my grand plan into effect. I took the beginning, then Andrea (the aforementioned spouse) took over and to my delight, she spun the tale in a direction I never would have imagined. The clouds lifted. I relaxed. Switching back and forth, Andrea and I supplied each other with ideas, and story time became fun again.

It gets better. The other night, my two children asked to join the storytelling circle. I started a tale of a monster invading a ballet school, my wife added a bit, and then ” lo and behold ” out popped the inner ham of my six-year-old daughter, Cassie. She took the ball and finished the entire thing! All Andrea and I had to do was lean back in our respective seats and listen. It was a brilliant role reversal. By the time Cassie had finished, we had both dozed off. Try it sometime.