Warning: call_user_func_array() expects parameter 1 to be a valid callback, class 'collapsArch' does not have a method 'enqueue_scripts' in /home/customer/www/blog.earlymoments.com/public_html/wp-includes/class-wp-hook.php on line 308
 Teen Donates Thousands of Books to Schools 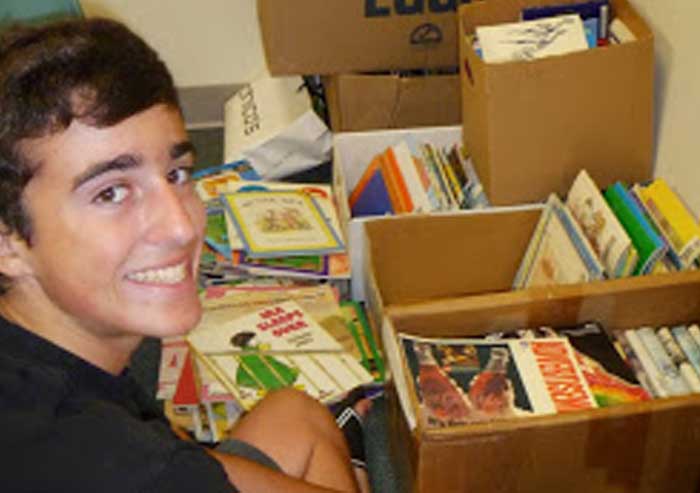 Ryan Traynor knows books have the power to change lives.

The 16-year-old has collected and donated more than 25,000 books to schools and charities in his home community of Redwood City, California.

Ryan got the idea to get books into the hands of kids at age 11 after he joined the Traveling Story Time program at the Redwood City Public Library. He got to read to preschoolers at a local Head Start program. “They would chant, ‘Ryan, Ryan,’ when I arrived, and clap loudly when I was done,” he said. At the end of the year, the library gave each child a book and they would hug it like it was a long-lost favorite teddy bear.

The Link Between Literacy and Gangs

“I could tell that, for most of them, this was the only book they had for themselves in their home,” Ryan said. He realized that books were a big need in disadvantaged areas of the city. Almost 60 percent of the third-graders in his community read below their grade level, according to state test results. He also saw a link between the rise in gang violence in his town and the fact that many kids did not know how to read well and had little interest in school. “I knew I had to get books into the hands of these kids,” he said. So Ryan started a book drive. He got schools, the police and fire departments and businesses to act as collection sites.

Several schools in Redwood City have received Ryan’s donated books. They include Orion Alternative, Fair Oaks Community and Clifford elementary schools. Ryan even has a website that offers other kids information on how to run successful book drives.

How STEM Can Play a Role

Ryan, a rising junior at St. Francis High School in Mountain View, California, is extraordinary in other ways, too. He’s an Eagle Scout and editor-in-chief of Amazing Kids! Magazine. He teaches money management to teens at the local library. He started and serves on the Youth Literacy Council. And he’s planning a citywide STEM Fair next April to get kids excited about careers in science, technology, engineering, and math. “Making school subjects fun will encourage an interest in school, increase literacy, and expose minority children to STEM subjects and encourage them to consider them for later careers where there is a significant racial gap,” he said.

“I look at giving back to others as part of my daily life,” Ryan said. “Besides making me feel good, you can see the impact of giving others hope and a way to better themselves . . . There’s magic in those moments that make the time and hard work all worthwhile.”