Warning: call_user_func_array() expects parameter 1 to be a valid callback, class 'collapsArch' does not have a method 'enqueue_scripts' in /home/customer/www/blog.earlymoments.com/public_html/wp-includes/class-wp-hook.php on line 308
 This Blog Is Broken

When the fine folks at Hooked on Phonics asked me to write a book for their new program, I pitched them four or five ideas. Of course they chose the one I was the most worried about writing, but also the one I secretly wanted to write the most. Sometimes the cost of a great idea is the burden of not messing it up. The book became This Book is Broken. Ironically, it’s really messed up. 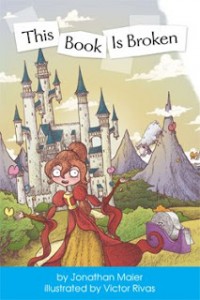 I’ve always loved books and shows that are aware of their own existence. Sort of like a lucid dream, a dream where the dreamer knows she’s dreaming. Or an example I used in my pitch: Duck Amok, the GREATEST CARTOON EVER MADE. In this animation short, Daffy Duck is mercilessly tormented by his own animator, who turns out in the end to be Bugs Bunny. (Oh ! spoiler alert. Um, too late. Sorry.) Or if your refined sensibilities demand a more literary example, consider the play Six Characters in Search of an Author, Luigi Pirandello’s deconstruction of theatrical artifice. (No, I don’t know what that last part means, but then I didn’t claim to be the one with the refined sensibilities.)

From such inspiration was This Book Is Broken born. It’s the story of a princess who finds herself in a book that’s hopelessly damaged when it falls from the shelf. Despite switched words, scattered pages, and misplaced illustrations, the feisty princess is determined to see the story through, even if no one recognizes her without her crown. 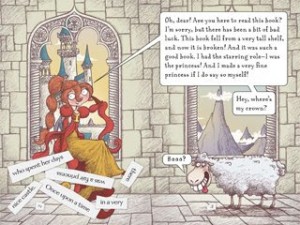 Putting the story together was more like working on a puzzle than writing a book. Below is my first scribbling of ideas. It’s really just a brainstorm of the shtick I could use based on the broken-book conceit. Gotta have a completely blank page… oooh, and an upside-down page… and what would happen if page numbers were lost? Stuff like that. 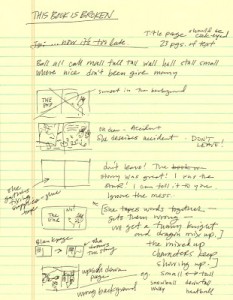 So I had all these gimmicks and a specific page count I had to hit and a grade-appropriate word list. Oh yeah, and I had to write the original story that existed before the book was broken, and the final story on top of it.

That’s when the uncontrollable crying started.

I even tore the flocked Pirandello poster from my bedroom wall and deconstructed it into a million tiny pieces.

I recovered, though, buoyed by a steadfast belief in the power of imagination (and a cowering respect for an iron-fisted deadline). The brain can’t help itself: It has to make meaning from mess. Sure enough, the book eventually fell together. And then it was the artist, editors, and production staff’s turn to cry. How are we going to make this book work?! Waaaa! 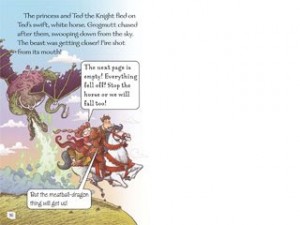 While this broken book is helping kids learn to read, I hope it’s also helping them break some of their conceptions about what a book has to be and how a story must be told. I hope it opens the door a little wider to that mischievous playground of imagination, where there are no rules, and e ve n a blo g can be br o